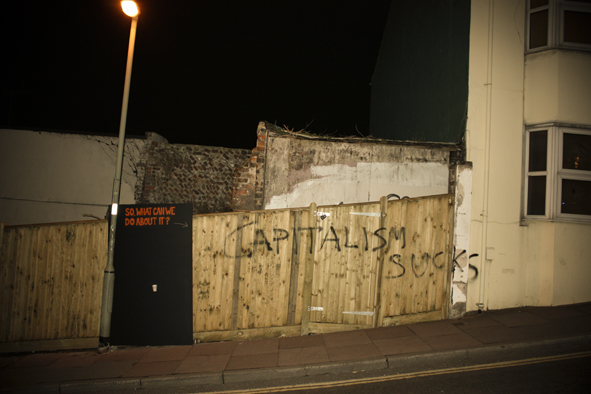 »Experiments in imagening and exploring possibilities.«

Project for the MA Sustainable Design course, at the University of Brighton, UK, in co-operation with Priyanka Patel and Victoria Jackson.
The purpose of this project was to investigate whether dialogue about future possibilities can be instigated in the public sphere through interactive tools.

»Opening a discursive space gives others the opportunity to insert their contents into the structure we have built.« -Pablo Helguera

The purpose of this project is to investigate whether dialogue about future possibilities can be instigated in the public sphere through interactive tools. This came about as a response to the feeling of being in an environment of high awareness and engagement with the sustainability debate on the MA Sustainable Design course at the University of Brighton and wanting to find out whether this discourse is, or could be, continued outside of this space. The project has been approached collaboratively using deliberative methods to develop the tools.

»Complex systems are shaped by all the people who use them, and in this new era of collaborative innovation, designers are having to evolve from being the individual authors of objects, or buildings, to being the facilitators of change among large groups of people.« – John Thackara

The intent was to instigate conversations about the aspects of daily life which need to be reconsidered to take them in a more sustainable direction.
The hope was to gain a better understanding of awareness and enable the exchange of ideas and alternative possibilities by opening up the discourse and creating spaces to reflect upon current practices.
The approach taken was consciously dialogical and not directive, enabling potentiality that may have an impact on behaviour.
The position taken is that behaviour change is a key leverage point in the transition towards a more sustainable way of living.
The intention was to be participatory and pluralistic through the methodology used, by asking questions rather than making assumptions.

»The call is to live the future. Let us join together joyfully to celebrate our awareness that we can make our life today the shape of tomorrow’s future.« – Ivan Illich

The subject of ‘the future’ was used as a way for people to engage in the subject of sustainability by default. It is commonly felt that the term ‘sustainability’ can create barriers to discussion outside the field and is often not helpful. The topic of the future has some key characteristics which can open up discussions. It requires imagination to conceive of it, facilitates potentiality and could be seen to be under common ownership. Also, as it is there to be shaped, it offers a degree of liberation from the constraints of the current ways of being. Additionally, it would seem like common sense to assume that everybody hopes for a better future.

».. to choose our futures we need to understand the possibilities of the future.« – Edward Cornish

Four tools have been developed for this project. The common characteristics of the tools are that each has been designed to elicit public participation in a conversation space. They are to be used in the public realm and each has one accompanying question to initiate discussion around it. The aim in creating the tools is not to tell people what the future might hold but to explore and envision possibilities; to take sustainability conversation to the street to gauge levels of awareness and to learn about the different perspectives of people from a variety of backgrounds. As well as to initiate dialogue, that may have the potential to branch out further, making contact with people who have insights that might feed into the subject of sustainability.

The four different tools are:

#1 A blackboard responding to graffiti in the street.

#2 A set of three futurescaping photo elicitations to generate conversations in public spaces.

#3 A pack of scenario building cards to prompt conversation about a preferred future.

#4 A directed walk to raise awareness of the current state of affairs in order to imagine future scenarios.

the importance of dialogue.

»If you want to change the paradigm, the worldview, don’t take the role of the teacher, neither the prophet, priest or politician. Don’t challenge, attack or advise the ego, otherwise the ego becomes hostile, afraid and dismissive if you try to confront it directly.« – Bill Devall

Conversing is an effective tool for learning as it requires active listening by the participants in order for them to respond, question or challenge the content of the conversation. In contrast, telling is uni-directional and can put the listener into a passive role where it is not necessary for them to process the information being transmitted to them.
According to Socrates, dialogue encourages ordinary human reflection in which »participants may not reach definitive outcomes in the form of agreed answers. This need not lead to disappointment. The positive experience of participation in co-operative thinking is of major importance; it can be very rewarding as a learning process and have profound meaning for one’s life.«

view a description of the four tools here (PDF): thefuturingspace_tools